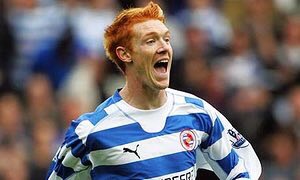 Remember the epic Reading side of 2006/07 who managed to secure a top half finish in their debut Premier League season? Yes? Then you’re sure to remember Dave Kitson.

In a way, his story was like the original Jamie Vardy fairytale, as he went from stacking frozen foods at Sainsbury’s to starring in the Premier League.

Following a record breaking Championship season in which the club secured 106 points, Reading were promoted and many had expected them to go straight back down, however that was not the case. Their team of that season was one built of immense team spirit and belief and it showed on the pitch as they managed to finish the season in 8th place, narrowly missing out on a European spot. Striker Kitson will go down in history as the player who scored Reading’s first ever goal in the Premier League (in a 3-2 win against Middlesbrough).

He went on to become an influential player for the club and his goal scoring abilities, as well as his tall build and by now rather iconic ginger hair made him stand out amongst other strikers in the league and I’m sure that many fans and pundits alike were pleased to see an Englishman doing so well at the highest level. He left the club in 2008 with a record of 54 goals in 135 appearances.

Before hitting the “big time”, he began his journey at nine league sides Hitchin and Arlesey Town, before attracting the eye of League Two side Cambridge United in 2001, where he would go on to really make a name for himself. In the 2002-03 season he netted 25 goals and the following season earned him a move to Reading. His return of 47 goals in 123 appearances in all competitions ensured Kitson’s place among Cambridge’s  all-time legends.

It hasn’t all been a bed of roses though. Kitson moved to Stoke City in a club record deal of £5.5 million in 2008 but it quickly became apparent that he was not entirely settled there. His disagreements with manager Tony Pulis were widely covered by the media and that may have made the situation worse for the player. He was loaned back to Reading and then Middlesbrough for a brief stint before returning to Stoke.

However, it’s fair to say that no matter where Kitson has gone, he has always provided the goals. His league scoring record speaks for itself: 40 in 102 at Cambridge, 54 in 135 at Reading, 3 in 6 for Boro, 12 goals for Portsmouth, 11 for Sheffield United. He even managed to score 3 times during his tough spell at the Britannia stadium.

AFEFootballNews got in touch with Kitson via instagram and asked him a few questions. An honest and open interview, here’s what he had to say …

AFE: How hard was it making the transition from lower league football to the Premier League? Because you made it look easy, but I suppose it was tough yes?

DK: Like most players that come from non league, we have three things going for us that really help.

We aren’t paid very much money initially, so there is a desire to earn more. Nobody knows who we are, nobody has heard of us, so we have the surprise factor when we play against other players that have been in the league system for much longer. And thirdly, we are desperate to make up for lost time having been overlooked and desperate to prove that the scouts that perhaps rejected us at a younger age all made a mistake. Certainly thats how I felt.

But I still had to learn how to get used to playing against more physical players, I had a very tough weights program that caused me injuries but by the end of it I was much stronger. If I’d gone straight to the Premier League or the Championship even, I think I would have been rejected again because I wasn’t ready. Coming up through the leagues worked really well for me and every time I jumped up to a higher league I was ready for it.

AFE: In Reading’s first season in the Premier League, the club secured a top 10 finish, was that a realistic aim for you before that season began or it go even better than planned?

DK: We’d have all said that we just wanted to stay in the league. Which is obvious.

The top ten was a great achievement but I don’t think it surprised anybody, our team was so good and so hungry to succeed in the Premier League that I’m fairly sure a few savvy punters made some smart money betting on us to do well.

People outside of the town just saw the name “Reading” on the fixture list and they probably felt that we were unheard of, unfashionable and unfancied to do well. Even if they bothered to look at our team sheet they probably didn’t recognise any of the names. But a club does not win the Championship with 106 points if its team isn’t outstanding. And our team was outstanding.

AFE: You and Kevin Doyle formed a pretty deadly partnership at Reading, apart from you two though, who was the other stand out player in the squad would you say?

DK: Well firstly let me just point out that the season we won the Championship started with myself and Leroy Lita upfront. Leroy still gets upset if people don’t remember that so I always make a point of telling people because he played a big part and was unfortunately injured.

But as you say, Kevin Doyle then had the opportunity to come in and play and he was perhaps the hungriest player to succeed that Ive ever seen, he fought and scrapped for every blade of grass and every inch of pitch, just the same as I did. There were not many defences that could handle the pair of us, it was like having two Jamie Vardys all over you at once.


However, I have to say that the team backing us up was superb. There are two players that are simply the most skillful that I was ever lucky enough to play with in Nicky Shorey and Glen Little but the stand out player is Ivar Ingimarsson. Most of the players believe that.
Ivar was a huge influence on our dressing room, smarter than anybody Ive even met inside or outside of the game and a really nice bloke. We were good friends, still are, and between us we made sure that the changing room kept its feet on the floor. As a player he was incredible, he had an amazing leap, he was as strong as anybody and he was deceptively quick across the ground. Plus he scored goals for us, important goals. He doesnt get the credit he deserves outside of our changing room but he doesnt care. Thats what made him so important.


AFE: What’s your best goal you have ever scored in your opinion?

DK: The best goal was against Bradford, an over head kick that flew in to the top corner.

My favourite goals are the West Ham goals though. Once I scored against West Ham, which was really the first big club that id played against, what with Pardew coming back etc.. I really announced myself in football by scoring those two goals and I was ready for anybody after that. I proved that I was as good as anybody else, in my mind at least, and I got so much confidence from it.

I then scored a hatrick in the next game against West Ham, in fact, I could never understand why West Ham never signed me, as I scored again against them in the Premier League the season after.

AFE: How was your relationship with Tony Pulis at Stoke? Was it as bad as some believed or was it just over exaggerated by the press?

DK: It wasn’t great. I didn’t like the style of football that Stoke played but that was my fault.

I left for Stoke without asking any body the first thing about the club or how they played their football. So I only have myself to blame. It was not a nice experience, I played in midfield for the club but was criticised for not scoring goals as people saw me as a striker. But Tony kept playing me because i was doing a good job in midfield. I just wish he’d come out and actually said that he was playing me in midfield and then perhaps people would have understood my situation.


AFE: You’ve always been known for speaking your mind when it comes to interviews and once famously said that you “didn’t like footballers”, what exactly did you mean by that?

DK: I didn’t like what the lower league unprofessionalism. Like ate mcdonalds, got drunk, came in stinking of booze for training and talking about stuff that I didn’t care for.

They resented me for wanting to be professional and being able to talk about things other than cars and girls. I found that the further I got up the leagues and the more professional the players became, it actually became easier to deal with them. The higher up you go, you realise that all the players are desperate to do as well as possible, even if it is just to keep their place in the team rather than win an actual trophy, so there is much more mutual respect for each other and tolerance of the quirkiness and characteristics of individual players.

–
AFE: Finally, who was your footballing idol when growing up and did you try to model your style of play off any other player?

DK: Paul Gascoingne was the player that I felt I was most like. I enjoyed watching him, he had everything.

When I became a player though it was Xavi Hernandez without a doubt. Xavi changed the face of football, without him, Barcelona would never have reached the heights that they did. You can have Messi and Neymar and Suarez all you want, but ask any footballer who they most want to be able to play like and they’ll say Xavi.

Fair to say he’s had an interesting career then! Thank you very much for the chat Dave and all the best with your post football days.

One thought on “The Big Interview: Dave Kitson.”