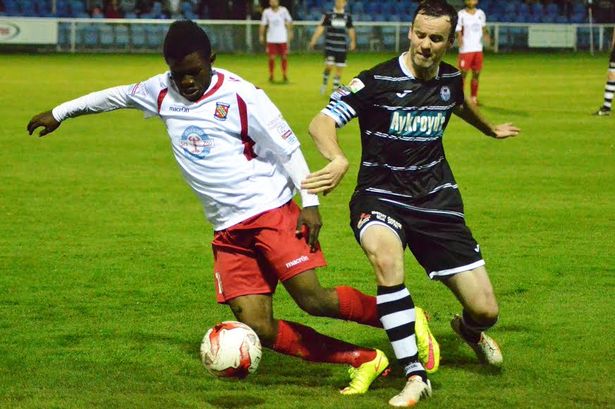 Upon joining Bangor City in the summer of 2015, pacey forward Christian Langos was quick to show the Nantporth faithful exactly what he could do with the ball at his feet, adding some attacking flair to City’s game. The Congolese born forward had been progressing through the ranks as a student at the Liverpool FC Foundation Football College at Liverpool University before going on to sign for Evo-Stik Northern Premier League side Marine FC in 2014/15. He then joined Bangor ahead of the 2015/16 Welsh Premier League campaign and became a regular feature in the side’s starting eleven.

Unfortunately though his progress had been temporarily halted by a knee injury that he sustained during the second half of Bangor’s 3-0 defeat at Bala Town in September of 2015. An injury that had kept him out for quite some time, but now he is back with the first team once again and looking to cement a place in the starting line up.

AFEFootballNews got in touch with Langos to see how his passion for football began, and how life at Bangor has been for him so far. Here’s what the man himself had to say:

AFE: Hi Chris. First off, what made you want to become a footballer?

CL: Hmmm, I guess it’s just something that I like and when I was growing up people used to tell me that I was really good at football and they told me to never stop playing the sport. That gave me the motivation to carry on playing no matter what.

AFE: So who was your idol when you were growing up and why?

CL: My idol was Didier Drogba. When I was back in my home country, we used to follow French football and I wanted to score goals just as he was doing.

AFE: What would you say is your biggest achievement/best moment in your footballing career so far then?

CL: I’d say that playing at the level I am now is my biggest achievement so far, I was playing college football just a few years ago. Also the fact that I got the chance to play in the FA Cup (with Marine FC) was a good one.

CL: Umm that’s a tough one … but I’ll go for Karl Clair who I played with at Marine.

AFE: And the best you’ve played against?

AFE: How hard was it to make the step up from college football to playing in the Welsh Premier League with Bangor?

CL: It hasn’t been that hard for me to adapt as when I was in college football I always wanted to play at higher level than that. The difference now is that I’m getting to learn more about the physical side and the tactical side of the game at this level.

AFE: How are you finding being at Bangor City FC then?

CL: Compared to last season it’s been difficult to be consistently included in the starting eleven as I’ve been struggling with a few injuries and so I’ve also found it a bit hard to be on the score sheet, but I’m sure once my injuries are over, all will be the way I expect it to be.

AFE: One last question Chris … What are your targets for this season?

CL: Personally I want to have scored at least 10 goals come the end of the season. As for the team, I want us all to be able to achieve European football as I think that’s where we belong. Those are my targets.

It’s clear to see that the youngster is desperate to succeed in the Welsh Premier League  by scoring a goal or two and also seems to have a very positive attitude when it comes to overcoming his injuries. Cheers for volunteering your time Chris and all the best on the road to full recovery, here’s wishing you and Bangor a great season!

All pictures collected from a google search of the player’s name and in no way belong to AFEFootballNews.